Do not take the promptings of the Holy Spirit for granted. I have to confess that I have been ignoring what The Lord has been telling me to do recently, dismissing them in the name of pride.

But thank God for His faithfulness, His mercy… And His reminders. Paola and I decided to visit our good friend Melai this afternoon. As soon as we settled in to talk, I definitely saw that she has had recent opportunities to see the goodness of The Lord this side of eternity.

I won’t go into much detail regarding what she’s been experiencing, and what stories she had, but I will say that I was reminded of how ignoring the promptings of the Holy Spirit have fatal consequences, and how heeding them can save lives. Literally.

Fast forward to 2 hours later. As I left Paola’s place to get to the bus station (which I assumed would be crowded), I encountered an old lady selling garlands of sampaguita in an intersection. Right then and there I was moved to give her some money. No hesitations this time, I thought: I handed her a bill with a ‘God bless you.’

I got a taxi soon after that. Again, I was prompted to open a conversation with the driver. There were hesitations this time. I didn’t want to hear a sob story, I didn’t want to hear a guy talking me into adding a tip to my fare. Well, as I finally asked him how his Christmas was (as I was prompted to ask), we not only had a meaningful conversation, but I had the opportunity to share Scripture with him as well.

Yeah, and I tipped him anyway. Thank God for His grace.

This is the best part. Soon as I got off the taxi I entered the bus station – crowded, as expected. I immediately fell in line to get a ticket, going closer to the counter to see what I feared most – the ticket I was to purchase would get me on a bus that leaves close to 3 hours later. I pulled off a Gordon Ramsey (“f*cking hell”)…

…but God’s grace was STILL present. As I fell back in line a conductor for the bus which was about to leave said that they had one vacant seat. He had my attention and I immediately got his – I told him I’d take the seat. As soon as he acknowledged this with a pat on my back, man, I FLEW to the bus! I got on, and I saw my seat. That seat was for me. That was a blessing just for me.

So here I am. It’s a bit past 12:45am, and if not for God’s grace, I would just have left the bus station just now. Yes, I am acknowledging The Lord in this. I believe had it not been for Him leading me to take the time to be where I needed to be for that old lady with the flowers and for that taxi driver, I wouldn’t have been where I needed to be in that exact moment when that conductor was looking for a chance passenger.

Now sometimes it could just be the coffee we’re drinking, but oftentimes we will be gently prompted to do things according to His word – to pray for someone, to give to someone, to encourage someone, to get in touch with someone. When we get those promptings, let us not dismiss them – let us consider the other person, and not ourselves. Who knows? You could be used to save a life, a soul. 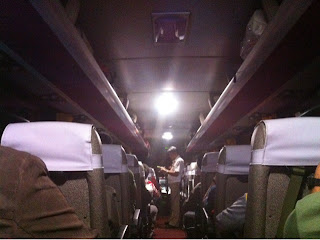