**I am free. I enjoy it now in particular considering the shackles and chains that dragged me down before freedom came. And it isn’t because of anything I did that I became free; no, it is Christ who set me free, and it is for freedom that He set me free.
This is probably why I’m a little more vocal now, a little more willing to type whatever I need to type, no longer compromising and even thinking about the reaction of other people. That stuff dragged me down.
Anyway, I was in the process of trying to document that one magical trip we had last 2008 to the Rockies, and I got sidetracked. I intend to continue it now, with a greater awareness of this freedom from the fear that holds me back.
That had to be said before I went on.**
Now, I remember that when we were in the summit of Mount Evans, or at least at the highest point where our car could reach, I was so overcome by emotion that of all things, I gathered my brother and parents into the car and we prayed. We claimed the nation for Christ. We declared blessings for the nation. I don’t really remember any other points we expressed but that seemed to stick out.
I was high. Between being so excited about seeing snow for the first time and just trying as much as I could to suck in all of God’s glory seen in the mountains and trees, I felt God’s goodness – His utter goodness which, as the Word declares, leads to repentance. I was high.
Alas, the time came for us to leave. The sun was setting – or rather, it was just getting darker. We had to drive back down. I don’t remember what we were talking about, and perhaps we were just enjoying the worship songs being played on the stereo, but it wasn’t long until I saw something that just needed to be taken by my humble, handy dandy D40.
The mountains and hills seemed to go on and on into the distance, and though that could have been picture perfect in itself, it seems as if The Lord was saying, ‘You ain’t seen nuthin’ yet, son!’ as a cloud in the distance burst with rain over the rolling landscape. 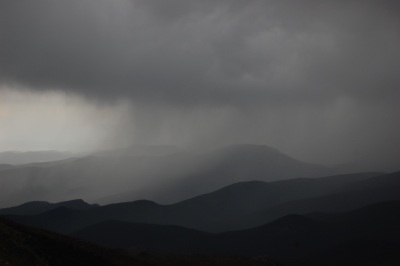